GMOs on the news again as dangerous element in our western food production.

A new study released in September of this year gives even more evidence that GMOs should have been banned before they were ever allowed on the market. Read on to find out how “Genetically Engineered Crops, Glyphosate and the Deterioration of Health in the United States of America” pinpoints a significant correlation between GMOs and 22 diseases.

Why does the biotech industry keep hiding the toxicity of their products? Well, there are numerous reasons – the corruption of the American and international governments, the fact that the USDA’s main man appointed by Obama was a former Monsanto executive, and the tremendously deep pockets of mega-corporations to launch propaganda campaigns – are just a few.

The aforementioned title was published in The Journal of Organic Systems. It is full of very detailed evidence of the link between genetically modified ingredients and diseases such as liver failure, urinary and bladder cancers, hypertension, thyroid disease, stroke, obesity, and more. It is replete with telling charts and graphs that describe visually the mayhem that GMOs have unleashed on society.

Much of the study focuses on the introduction of glyphosate and its subsequent ramifications on human health. The herbicide was introduced in 1974, but the research conducted within this study relied on data since the 1990s, since that is all that was available. Since the early 90s, glyphosate use has grown astronomically. 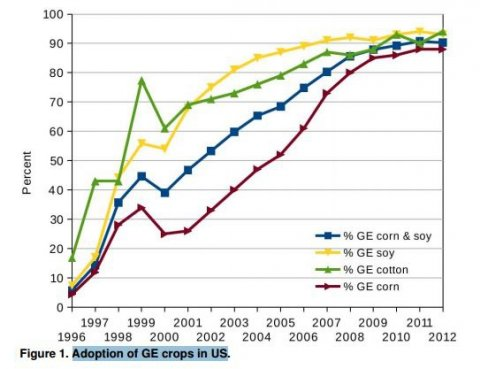 As the study details:

“ Glyphosate disrupts the ability of animals, including humans, to detoxify xenobiotics. This means that exposures to the numerous chemicals in food and the environment, such as endocrine disrupting chemicals and carcinogens, could be causing levels of damage that would not occur if the body were able to detoxify them.”

Though the authors admit that correlation is not proof of causation, they state that:

“ We have data for 22 diseases, all with a high degree of correlation and very high significance. It seems highly unlikely that all of these can be random coincidence.”

consumption. It was the first-ever recall of a genetically modified food. The anti-GMO activist coalition Genetically Engineered Food Alert, which detected and

So what did the authors of this study conclude?There is an obvious and significant correlation between the increased use of glyphosate and genetically engineered crops grown specifically to withstand its use, and a growing multitude of diseases and their frequency. Many of the graphs show a marked increase right around the 1990s when the makers of glyphosate enjoyed a boost in their profits and an enormous swell of herbicide use from products like RoundUp and others containing the same chemicals.

So what did the authors of this study conclude?

There is an obvious and significant correlation between the increased use of glyphosate and genetically engineered crops grown specifically to withstand its use, and a growing multitude of diseases and their frequency. Many of the graphs show a marked increase right around the 1990s when the makers of glyphosate enjoyed a boost in their profits and an enormous swell of herbicide use from products like RoundUp and others containing the same chemicals. 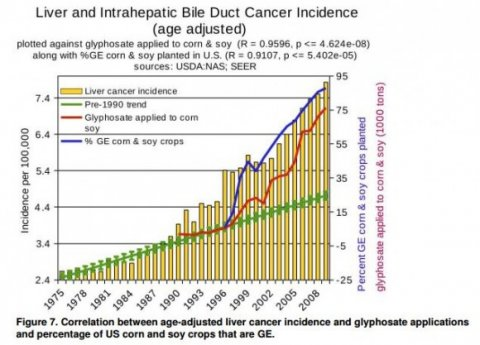 hat there is a link. Although correlation does not necessarily mean causation, when correlation coefficients of over 0.95 (with p-value significance levels less than 0.00001) are calculated for a list of diseases that can be directly linked to glyphosate, via its known biological effects, it would be imprudent not to consider causation as a plausible explanation.”

What is a GMO? Genetically modified organisms (GMOs) are living organisms whose genetic material has been artificially manipulated in a laboratory through …

Sure there are many reasons for chronic disease – diet, lack of exercise, exposure to other environmental toxins, and even genetic predisposition among them, but when your body can’t rid itself of a known carcinogen because it is added straight to the food supply in copious amounts – of course you are going to get sick. It doesn’t take 22 charts to figure that out. After all, glyphosate is appearing in people’s urine, blood, and breast milk.

Since glyphosate is also an endocrine disruptor, this would imply that the current permitted residue levels in food could be causing multiple health problems that have been documented in the scientific literature.

The endocrine system is essential to human health. Since it is being attacked by biotech chemicals on a daily basis, the glands in our bodies like the pituitary, thymus, and pineal can’t secrete hormones that keep us fit, healthy, and disease-free.

All of these functions are carried out by the endocrine system:

Of course, the body will start to respond with disease-like symptoms when the metabolism, reproductive system, and nervous system are constantly trying to right themselves due to glyphosate exposure.

We are the guinea pigs of biotech – a grand science experiment gone wrong (or right depending on who you talk to and the motives suspected behind biotech technologies). 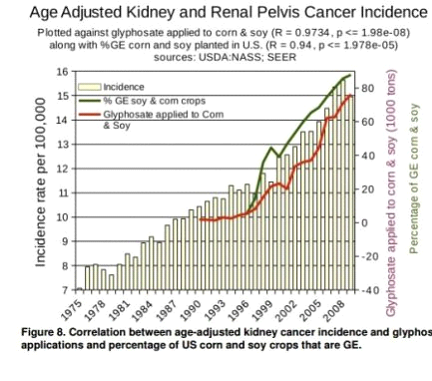 “The data presented in this paper highlight the need for independent scientific research to be conducted, especially in the areas of the endocrine disruption, cancer precursor, oxidative stress, gut microbiome and the Cytochrome P450 pathways. It is our hope that, in addition to more basic research in the form of toxicology and carcinogenic studies, epidemiology studies will be undertaken by experts in each of these disease categories.”

In my estimation, there is already ample evidence, even with the biotech white-wash and out-right manipulation of universities, non-profits, and scientific journals, that GMOs are dangerous.

So, until we are able to ban all GMO crops completely, add these 10 GMO foods to your GMO foods list so you can more easily avoid them. You can also avoid the eight main GM crops:

Below are some of the key charts from the Journal of Organic Systems study. You can also read the full study on the correlation between GMO and 22 different diseases for more details.

0 0 0 0 0
Previous : North Korea, An Asset To The Weapon Business
Next : NATO, USA and Israel Provided Arms To ISIS