In 1899, Nikola Tesla heard from aliens.

The pioneer of radio had constructed a massive tower at his home/laboratory in Colorado Springs for the purpose of experimenting with wireless power, but instead may have accidentally become the first human being to receive a message from the cosmos.

“I have a deep conviction that highly intelligent beings exist on Mars,” Tesla told a reporter from the Albany Telegram in 1923. “While experimenting in Colorado…I obtained extraordinary experimental evidence of the existence of life on Mars. I had perfected a wireless receiver of extraordinary sensitiveness, far beyond anything known, and I caught signals which I interpreted as meaning 1–2–3–4. I believe the Martians used numbers for communication because numbers are universal.”

Despite Telsa’s “deep conviction,” his otherworldly hypothesis earned him the ire of his contemporaries, many of whom dismissed his assertions as little more than a publicity stunt. However, many have since returned to Tesla’s wild conjecture in the past century and it has been suggested by the Tesla Society that perhaps what he really was receiving were radio waves from deep space or interference from storms on Jupiter. 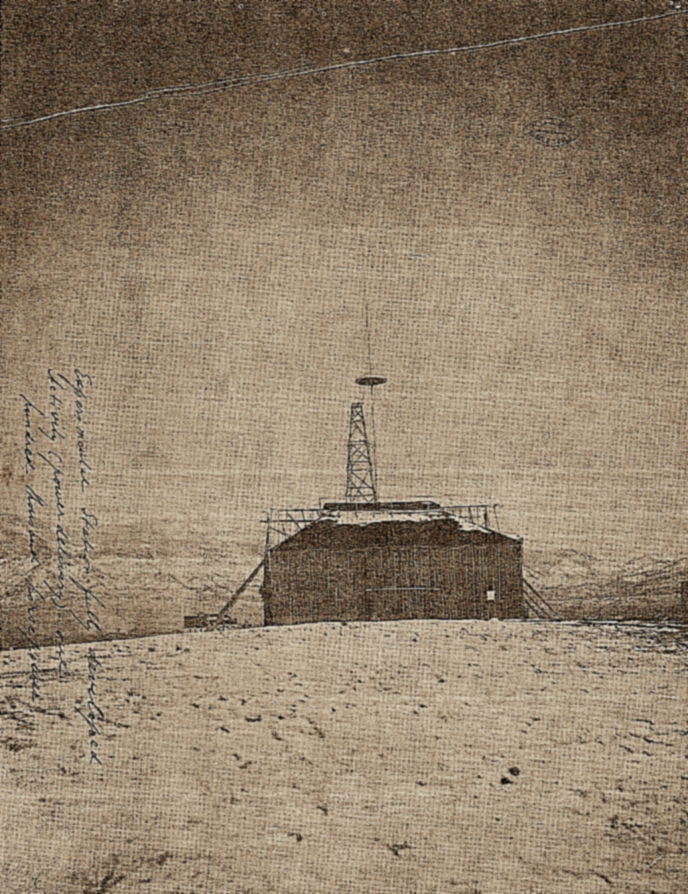 While this is slightly less exciting than getting a phone call from ET, sometime in the 20th century a competing theory arose, claiming that Tesla was actually contacted by a 13,000 year old alien artifact in orbit around Earth, an object which has since become known as the Black Knight Satellite.

The history of the Black Knight is actually a conglomerate of several independent stories, all of which involve an unidentified object in orbit around Earth, but outside of a common moniker, share little else in common. No one is quite sure when the myth began or who started it, but its history spans from Tesla’s turn of the century experiments to the launch of the International Space Station, and the evidence in support of the Black Knight’s existence ranges from internet hearsay to photographic “proof.”

According to those who believe in the existence of some mysterious alien artefact lurking in the solar system, the Black Knight’s next attempt to contact Earth occurred in 1927. This time the alleged Black Knight transmission was picked up by a Norwegian engineer named Jørgen Hals.

While he was experimenting with radio signals, Hals noticed that some of the signals would echo back to him several seconds after the initial transmission had ended. He was at a loss to explain what accounted for these Long Delayed Echoes. In the 80-odd years since Hals’ discovery, no one has been able to conclusively explain what accounts for these eerie echoes, making them a perfect target for those with a penchant for conspiracies.

In 1973, science fiction author Duncan Lunan wrote an article for Spaceflight Magazine that speculated that a 13,000-year-old alien object in orbit around the Moon could have been responsible for these otherworldly echoes. For reasons that remain unclear, many of those who support the Black Knight theories usually cite Lunan’s 13,000-year-old space probe as a potential manifestation of this mysterious satellite, despite Lunan never having mentioned the Black Knight at all. The persistence of these rumors has prompted Lunan to outright deny having anything to do with seeding the theory.

The next alleged “sighting” of the Black Knight was in the early 1960s, when TIME reported an unknown object was discovered to be in polar orbit around the Earth, something of an anomaly considering that both the US and Soviet satellites of the time were all in equatorial orbit. A few weeks after these initial reports, the US Department of Defense announced that the object had been identified as a piece of the Discoverer satellite.

Many were skeptical of this explanation, so for years this mysterious “dark” satellite continued to be cited as evidence of the existence of the Black Knight. As it turns out, the skepticism was warranted, but not because the object was an alien spacecraft. Rather, declassified documents revealed that it was, in fact, a part of the United States’ CORONA project, a mission that produced the world’s first successful space photo-reconnaissance flights in an effort to monitor Soviet missile facilities.

So the Black Knight lived on through the 70s and 80s as little more than a highly speculative urban myth with next to no hard evidence to support its existence. This all changed in 1998, when those on the Space Shuttle Endeavor flight STS-88 photographed an amorphous black object hovering ominously above the Earth.

In addition to providing what appeared to be the first photographic evidence of this evasive alien artefact, the STS-88 flight marked another major milestone for NASA by being the first American mission to begin construction of the International Space Station. In an interview with space journalist James Oberg, Jerry Ross, one of NASA’s most flown astronauts, related how a blunder during the construction of the ISS is the explanation for the unsettling photos of what appears to be the Black Knight.

A video of the release of the Trunnion Pin Thermal Cover

The STS-88 mission required two space walks, one of which involved wrapping four trunnion pins on the ISS node in thermal blankets to prevent heat leaks through the pins’ exposed metal. According to Ross, while he and fellow astronaut Jim Newman were on an EVA installing these thermal blankets, one of them came loose from its tether. (This was the third item to escape from Ross in two spacewalks, but the only loss that was unintentional.)

This was captured on video by other members of the STS-88 crew, who can be heard on the video speculating as to whether a retrieval maneuver would be possible. In the end this proved unworkable and the object was photographed several times before falling out of orbit a week later, burning up on its descent to earth.

So concludes the ultimate chapter in a wild story that spans a century, which seems to have drawn its life blood largely from the pervasive atmosphere of paranoia that colored the Cold War years. Yet despite the most conclusive evidence in favor of the Black Knight’s existence being categorically debunked by NASA folk, the renegade thermal blanket will forever live on in the Agency’s archive of ISS related space debris as Item 25570, and perhaps more glamorously as the infamous Black Knight Satellite in the internet’s infinite imaginarium.

True Mysteries from Space! is part of All in Your Head, a series that takes a scientific look at all things spooky and scary. Follow along here.

You can reach us at letters@motherboard.tv.