Scientists at the University of Edinburgh have spent the last few years developing a new form of wireless data transfer involving solar panels and light bulbs.  By fluctuating the intensity of the incoming light, modern solar panels can translate the intensity and turn it into information, like words, videos, music – and the list goes on.

Professor Harold Haas and his team have essentially unlocked what is known as “Li-Fi,” or Light Fidelity and are using simple LED light sources to power their internet and deliver the information in one packet.  “The potential expansion to the internet is massive and my aspiration is that this broadband solar panel receiver technology for Li-Fi will help solve the challenges of the digital divide throughout the world,” Haas says. 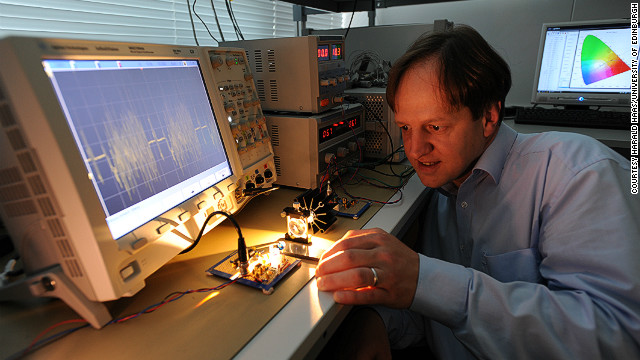 When he refers to the “digital divide,” he is talking about the more than 4 billion people, world-wide, that do not have access to the internet.  By introducing a system where someone can not only power their computer but receive the internet data from a street light, we can link people up to the global server without an expensive overhaul of new hardware.

It’s important to note that Wi-Fi still has its purposes, as it is lower frequency and can pass through walls, but the potential to synchronize humanity by packing information into the same light that is powering the daily device is immense.