Ap Verheggen has been on the cutting-edge of solar thought experiments for several years. You may recall his SunGlacier – a conceptual solar-powered leaf that produces water in the desert. Now he’s back with WaterDrop, a handheld solar-powered device that produces condensation for drinking. Ap acknowledges the concept is a bit like science fiction, but solar technology has taken huge strides in recent years, so it’s worth giving it a closer look. 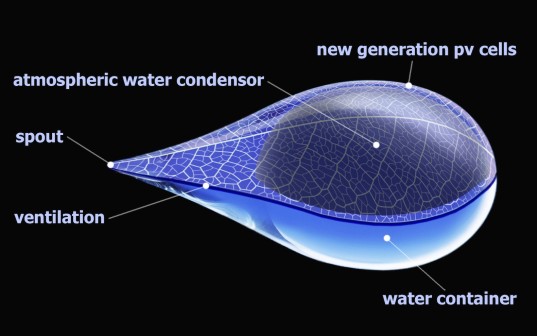 In this way drinking water and water for agriculture become available in most dry parts of the planet.”Related: SunGlacier is a solar-powered leaf that produces water in the desert. That’s the thinking behind WaterDrop and Ap’s various other solar-powered concepts.

Photovoltaic modules on the outside of the device would absorb solar energy during the daytime. This energy would then be used to cool the air to produce condensation and power a fan to create airflow. In theory, resulting water drops could be collected in a small cistern.

Ap recommends incorporating small rocks into the design to add much-needed minerals, while the spout is a built-in replaceable carbon water filter.“I know it is still science-fiction,” says Ap, “but for sure PV cells increase in efficiency, (only a matter of time) next to the speeding development of materials that store the cold of the night to help pre-cool the inlet-air during [the] daytime.”