Scientists at the Duke University have developed a Brain-machine interface that utilizes multiple animal brains which can co-operate and exchange information in real time to accomplish simple tasks. A comparison between Brains and Computers have proved that brains are not only powerful but they are also much faster and much more creative. Thus, if someone wants to have a computer that can out think the brain then the best way would be to create an organic computer by using brains.

Scientists at the Duke University announced that they have managed to create an Organic Computer by interconnecting the brains of animals which can collaborate to accomplish simple tasks. During the study, scientists made a ‘botnet’ out of animal brains or we can say a ‘Brainet’, wherein the network of monkey brains displayed motor skills while the networked rats performed computations.

Neurobiologist and leader of the research team, Miguel Nicolelis made a statement in the research paper which was published in the journal Scientific Reports: “Recently, we proposed that ‘Brainets,’ i.e. networks formed by multiple animal brains, cooperating and exchanging information in real time through direct brain-to-brain interfaces, could provide the core of a new type of computing device – An Organic Computer.” Since 1999, Nicolelis et al had been wiring animal brains to machine and they had succeeded in connecting a rat to a robot arm. However, this is the very first time when they have been successful at directly wiring together multiple animal brains to complete simple task or so called brain-to-brain interface. 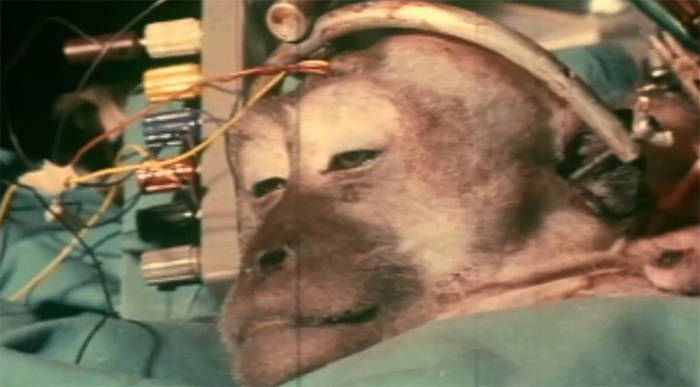 Building of Monkey Network: As per Nicolelis, his team implanted electrodes in the brains of rhesus macaque (a species of monkey), in such a way that it could pick the signals from a few hundred neurons. Next, the team connected two to three of the macaques to one computer which had a display and it showed a CG monkey arm. The monkeys were then separated and placed in different rooms. The arm was controlled by the monkeys and they had to direct it towards the target just like a boat crew rows it forward.

Now, every individual monkey could communicate and share the brain activity that was related to movement and senses. During the trials when the monkeys tried to operate, the computer monitor would display a virtual monkey and this would help the researchers to make out if the monkeys were able to touch the target.

Whenever, the monkeys could hit the arm to the target, this meant they successfully accomplished the task and the monkeys would be treated with their favorite juice which was a sort of their reward from Nicolelis. The research team discovered that, with time, the monkeys were able to synchronize their actions and co-ordination of their brain activities which ultimately resulted in an improvement in the execution of the tasks.

Surprisingly, the monkeys learnt how to move the arm so as to hit the target and thus get their juice. So Nicolelis says that it was the affection towards the juice which was making the monkeys move the arm and the monkeys were ‘not thinking’ to ‘move the arm’.

Building of Rat Network: Neuroscientists directly wired the brains of four rats and they discovered that different signals triggered different brain responses from these rats. Further, it was also found that 87% of the time, the collective response of rat brains was correct. During the tests, when the rats were able to synchronize their brains together to accomplish some task, they would be given water as reward.

The rats were further set to other abstract tasks by the scientists and they found that when the brains were together they were not only able to accomplish the tasks but even gave better performances. Scientists believe their performance was much better than that of an individual rat. Researchers thus, converted these rats into processors and then referred them as rat-borg collectives as “organic computers” or “brainets”.

Nicolelis says: “Nobody would do word processing or perform a Google search on an organic computer.”
According to Nicolelis, an organic computer can find its use in accelerating the rehabilitation of people who are suffering from neurological damage. For instance, presently to re-learn the motor skills after a stroke or brain injury it takes a very long time and the process is very painful. Nicolelis’ next goal is to develop a human brainet which could probably help a stroke patient re-learn how to move their paralyzed leg faster. Andrea Stocco, a psychologist at the University of Washington says: “This work opens up a bunch of possibilities that people have been dreaming about but have never been able to implement. I can imagine surgeons coordinating surgery together or mathematicians visualizing the solution to a problem together. Or musicians and artists with a new way of working creatively.”
He added: “At the core, the concept of telepathy is just transferring patterns of electricity through brains.”

In case of the rat network, Nicolelis’ computers were monitoring about 3,000 Neurons in all. Human brain has over 100 Billion Neurons and Nicolelis and his group is now working on different methods to develop the “human brainets”. Stocco says: “The difference between the number of little processes that happen in our brains and what we can record is enormous. One of the hopes is that we’ll be able to work with hundreds, thousands, or hundreds of thousands of neurons.”

Finally, to make better brain networks, what we need is a better technology that would be able to record and transmit information from more neurons. And Nicolelis believes there definitely seems to be a huge potential application of these Organic computers in the near future.